Based upon the real 19th century settlement of Cade’s Cove, the fictional community of Hickory Ridge, Tennessee is home to my hero Wyatt Caldwell and his aunt, Lillian Willis. In the 19th century, a recipe was called a “receipt.” This “receipt” for blackberry cobbler is Wyatt’s favorite and the one my heroine, Ada, learns to make for him.

Last weekend down in Poteet, Texas, we celebrated the annual Strawberry Festival with pies, cakes, drinks, and breads, all made from luscious Texas strawberries. The beginning of berry season reminds me of the blackberry cobblers my mother made when I was a child. Gathering the first ripe blackberries of the season was always an adventure, and then to dig into a warm bowl of cobbler topped with ice cream…well, it didn’t get any better than that. When I was writing Beyond All Measureit was very easy to imagine blackberry cobbler as the favorite dessert of my hero, Wyatt Caldwell. Here’s an easy, prize-winning version of Miss Lillian’s “receipt” for this classic summer treat.

My late mother-in-law, Juanita Vantreese Love, handed this recipe down to me more than thirty years ago when I was learning to cook for her son. 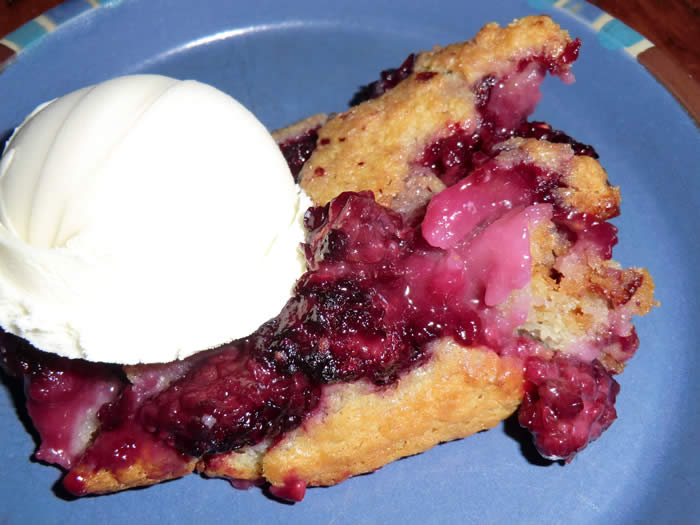 3. In a large bowl, combine flour, baking powder, salt, and milk. Stir in melted butter. Don’t over mix. Spread in an ungreased 8- inch square pan. Spoon the blackberry mixture over the batter.

4. Bake 45-55 minutes or until the dough rises and is golden brown. Serve warm with cream or ice cream.