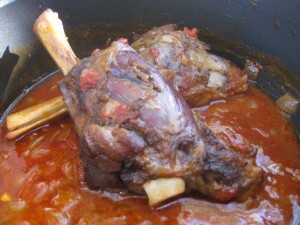 In my novel, Bread and Butter, Harry’s much-discussed lamb’s neck dish cycles through about a dozen versions in the course of the novel, as it goes from the dish that makes his name to the nemesis he obsesses over perfecting. My own encounter with the fabled lamb’s neck was at Chris Cosentino’s nose-to-tail restaurant Incanto, in San Francisco. I’d landed there by happy accident, having read a recommendation for it among the hundreds of others I’d been sifting through, but one look at the menu convinced me and my husband to cab it out to Noe Valley for pasta with cured tuna heart, raw egg, and parsley, followed by a dish of braised lamb’s neck that my husband and I passed back and forth–rather adversarially, if we’re being honest–down to its last shred of succulent meat. I have yet to source my own lamb’s neck here in Wisconsin, so I’m saving this New York Times recipe for a winter day.

I find it heartening that a little research into “braised lamb’s neck recipe” turns up quite a few hits. Among the handiest and simplest is at Adam Roberts’ blog, The Amateur Gourmet.   He credits Molly Stevens’ much-praised cookbook, All About Braising, for this recipe, and Stevens quite conveniently shares the recipe on her site.

Intrepid readers or readers with great butchers should swap shanks for necks for this recipe, but those who prefer something a little less, shall we say, graphic, should stick with shanks.

A recipe for braised lamb shanks in a lemony Provençal sauce paired with Michelle Wildgen’s BREAD AND BUTTER from ALL ABOUT BRAISING by Molly Stevens, (Knopf, 2004) and on www.mollystevenscooks.com