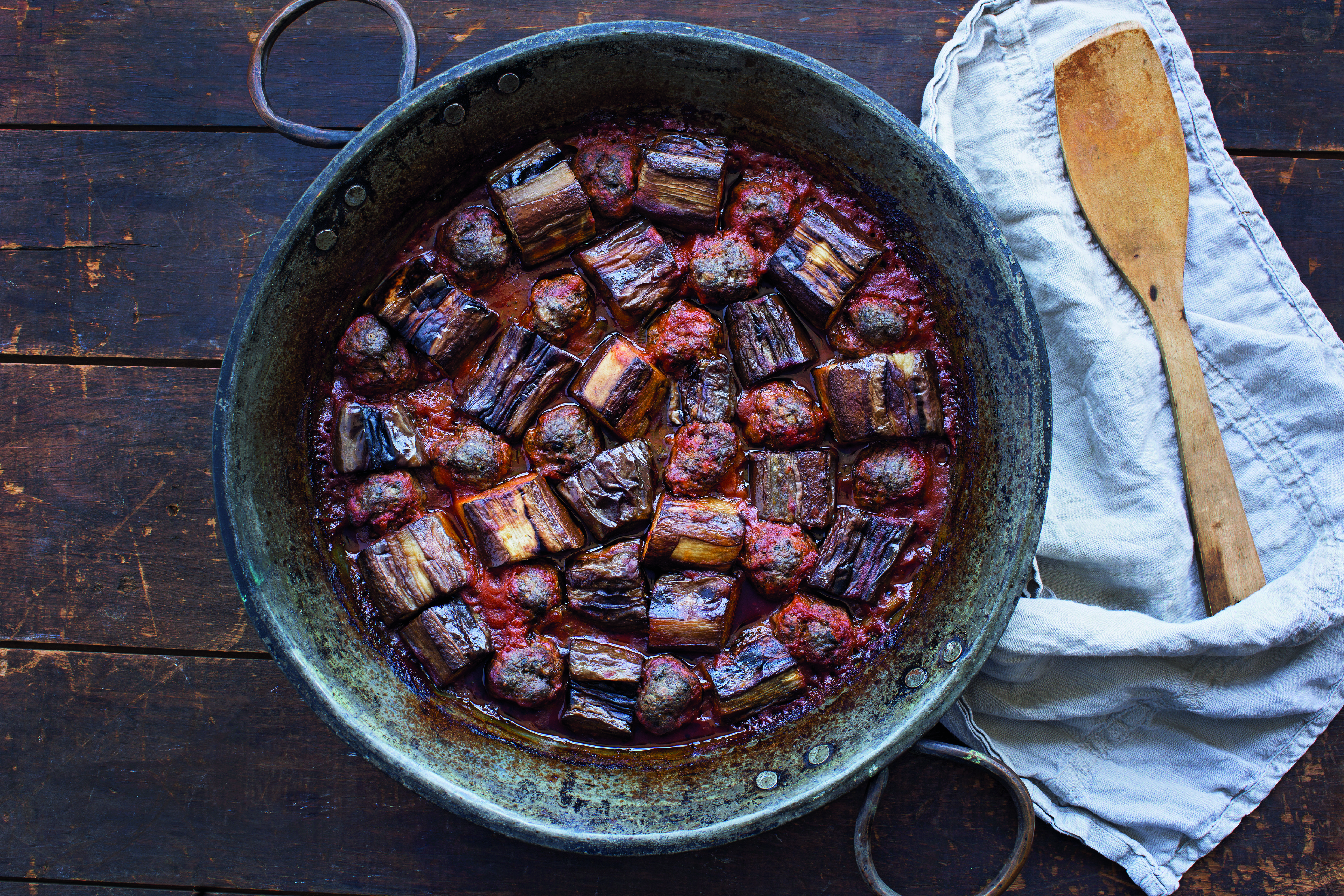 In What We Owe by Golnaz Hashemzadeh Bonde, while living as an Iranian refugee in Sweden, Nahid looks back on growing up in Iran and her life as a “young person with great potential.” She reminisces about the summer nights cooking in the kitchen with her mom and her six sisters when they were preparing food for a party they were hosting. Together they cleaned vegetables, while one sister fried eggplant and cooked pot after pot of meat to serve at their party.  “Eight women in a steamy kitchen. Mother and her seven daughters. It sounds like a fairytale.”

The following recipe, adapted from Istanbul & Beyond: Exploring the Diverse Cuisines of Turkey by Robyn Eckhardt and David Hagerman, relies on staples of both Turkish and Iranian cooking: meat, eggplant, tomatoes and pungent spices. Cookbook author Robyn Eckhardt introduces the dish:

In this homey dish, köfte generously seasoned with the region’s favorite five spices—cinnamon, allspice, coriander, cumin, and black pepper—are arranged, alternating with chunks of browned eggplant, in concentric circles on a bed of thyme-scented tomato sauce and then baked. The result is a celebration of contrasts: the toothsome köfte and silky eggplant, rich meat and warm spices countered by a tomato sauce heady with thyme.

I’ve eaten versions of this made with beef or lamb; the former is more common in Diyarbakır, where I learned to make it at Omayra Café. As with all meatballs, ground meat on the fatty side will ensure moistness.

The tomato sauce cooks in 25 minutes, during which time you can make the meatballs and prepare the eggplant. The dish is so pretty that it deserves to be served at the table, straight from the pan. Rice and Orzo Pilaf or Simple Bulgur Pilaf, both from Istanbul & Beyond, are good accompaniments.

Meatballs spiced with cumin, coriander, and black pepper and combined with eggplant in a tangy tomato-thyme sauce, evoke the Middle Eastern setting of WHAT WE OWE by Golnaz Hashemzadeh Bonde.

FOR THE TOMATO SAUCE

2 teaspoons Turkish or other crushed red pepper flakes, or to taste (optional)

4 long green chiles, such as cayenne or Holland (optional)

MAKE THE TOMATO SAUCE: Put the thyme, salt, black pepper, and red pepper flakes, if using, in a 3-quart saucepan, add the oil, and stir to coat the spices. Place the pan over medium heat and cook until the spices are fragrant and the ingredients are starting to sizzle, about 5 minutes. Add the tomatoes, with their juices, to the pan and use a spoon or spatula to break each tomato into 4 or 5 pieces. Bring the mixture to a lively simmer and cook, stirring occasionally, until the sauce taste rich and is almost thick enough to coat a spoon, 20 to 25 minutes.

Place a rack in the middle of the oven and heat the oven to 350°F.

MAKE THE KÖFTE: Spread the ground meat into a rough rectangle on a cutting board. Sprinkle over the onions, parsley, salt, ground spices, and chiles. Drizzle over the olive oil. Use a large chef’s knife to cut across the meat, then turn the cutting board 90 degrees and repeat, creating a crosshatch pattern in the meat. Slip the blade of the knife underneath one edge of the meat and fold it over toward the center. Repeat from the opposite edge, then fold from the top and the bottom. Use the palm of your hand to gently pat the meat out and repeat the cutting and folding one or two more times. Wet the palms of your hands and gently roll rounded tablespoons of meat into köfte measuring 1¼ to 1½ inches in diameter. You should have 20 to 24 köfte.

Cut the stem ends from the eggplants and use a vegetable peeler to peel them lengthwise, leaving alternating strips of unpeeled flesh. Cut each eggplant crosswise into 2-inch pieces.

Heat the olive oil in a 12-inch, preferably nonstick, skillet over medium heat until it just begins to smoke. Arrange the eggplant slices on their peeled sides in the skillet and cook, turning with tongs, until the skin is lightly browned, 8 to 10 minutes. Add more olive oil a tablespoon at a time if needed, but be careful not to use too much; the eggplant will absorb a lot of oil but will then release some as it bakes. Remove the eggplant to a plate to cool slightly.

ASSEMBLE THE DISH: Lightly oil or butter a 12-inch round baking pan or ovenproof skillet, or a baking dish. Spread the tomato sauce evenly over the bottom of the dish. Starting at the outer edge, arrange the köfte and eggplant in concentric circles, alternating them and placing the eggplant so that the cut sides face the köfte. Rub the chiles, if using, with 2 teaspoons olive oil and lay them on top.

Cover the pan or dish tightly with foil. Bake for 20 minutes, then raise the heat to 425°F. Remove the foil from the pan and bake until the köfte are browned on top, 15 to 20 minutes. Serve immediately, or set aside, covered with foil, for up to 30 minutes.