Flavored with lime juice, mint, and cilantro, this
honeydew melon salad is perfect for summer parties.

In the summer of 1922, only a few years before she became a famous actress of the silent screen and an icon for her generation, a fifteen-year-old Louise Brooks left Wichita to make it big in New York. Much to her annoyance, she was accompanied by a thirty-six-year-old chaperone who was neither mother nor friend. Little is known about this real chaperone, but my new novel imagines her as Cora Carlisle, a complicated woman with her own reason for making the trip. Of course, Cora has no idea what she’s in for: young Louise, already stunningly beautiful and sporting her black bob with bangs, was known for her arrogance, her lack of respect for convention, and her keen intelligence. Cora is hardly a stranger to adversity, but by the time their train pulls into Grand Central Station, she fears that supervising and protecting her cunning young charge will be at best exhausting, and at worst, impossible.

But she can’t turn back. For Cora, New York holds the promise of discovery that might prove a solace to lifetime of yearning, and so even as she does her best to endure and watch over Louise in a strange and bustling city, she perseveres in secret on her own mission. She does indeed make a great discovery, and though it isn’t the one she anticipates, The Chaperone becomes a novel of how much you can be changed by a summer, a city, and even by someone who seems born to annoy you, contradicting everything you say and believe. 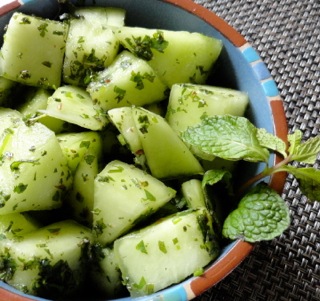 Combine the honeydew, lime juice, cilantro, mint and sugar in a bowl. Toss to combine. Refrigerate at least 2 hours before serving.