Whole almonds are lightly fried, dusted with a cumin and pepper
spice mixture, and served warm.

One of the challenges of writing historical fiction is to wrench readers from their comfortable 21st-century understanding of the world and hurl them back to a very different time and place. In my novel Pope Joan, this was especially difficult, for the novel is not set in Tudor England or the court of Louis XIV – periods in history that are relatively “modern” and therefore somewhat familiar. My heroine lived over a millennium ago – in the ninth century, darkest of the Dark Ages – a time utterly alien and unrecognizable. We learn so much when we read about such a time!

Even a brief study of the history of food reveals that we are incredibly blessed to live now, when we do, where we do. Many of the greatest kings of history did not eat as well as an average middle-class family eats now. A king could command quantity, but not always quality; he could feast until he was stuffed on the food available – but the selection was often very limited.

Here’s an idea book groups might enjoy: experiment by preparing a food “ninth century fashion” and then compare it with a modern version. You will find this to be a telling demonstration of the point I make above – as well as a great way to make history come alive. To see how to do this, read on below.

On page 30 of my novel, Pope Joan, fried almonds are served for dessert. In the ninth century, almonds would not have been skinned, and they would have been fried in a pan of animal fat suspended over a burning hearth. To duplicate this dish, buy a package of almonds with the skins still on (readily available in most supermarkets). Fry (i.e., saute) them in some lard. Do not spice or season them – for spices, when available, were very expensive in the ninth century, and the family in my novel was a humble one.

Happily, ingredients and food preparation methods have improved a great deal over the course of a millennium! So if you want to serve something truly delicious, try this recipe: 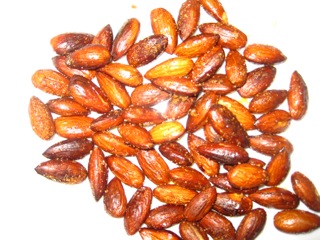 Note: You can double this recipe for a larger group