Southerners love to eat. It’s a well-known fact we have some of the highest obesity rates in the country. My Yankee mother-in-law (God rest her soul) once remarked, “Well, that’s because you Southerners fry everything in bacon fat.” Oh come on! Bacon fat is good. Still, she had a point, and like so much else in the New South, southern cuisine is changing, evolving into something more upscale, more calorie-conscious, while still retaining that oh-so-good flavor.

When I was going through my recipe cards trying to decide what to use that would complement my new novel, Beach Trip, I thought long and hard about Miss Emmy Lou’s Chicken & Rice Salad. Miss Emmy Lou was my grandmother. She lived in Cordele, Georgia and, to my knowledge, never took a prescription drug in her life. She lived to be ninety-five. In those days people worked hard, doing a lot of physical labor so it was okay to cook with slabs of butter and lard. You could eat six thousand calories a day and still be known by nicknames like “Tiny” and “Little Eva.” Most Southerners were poor and meat was not a daily commodity. You used a little fatty meat for seasoning beans or greens but everything else on your plate came from your own garden or was baked from cornmeal and flour in your own oven.

Sunday, after church, was the big meal of the week and usually meant ham or fried pork chops or fried chicken. Leftovers were always eaten, or reused creatively. I imagine my grandmother’s chicken salad probably came about originally as a way to use leftover chicken and was probably much more utilitarian than the recipe featured here. For one thing, rice in my grandmother’s day did not come out of a box, it came out of a large sack. And I doubt she knew anything of rice vinegar or sesame oil or arugula.

So I’m guessing Miss Emmy Lou’s Chicken & Rice Salad in its current form probably has more to do with my own mother’s culinary style. She was a Southern girl, too, a former homecoming queen, but she was also an art school grad. She was a culinary experimenter; she fed my family things like borscht and moussaka and ratatouille. She was also a skilled card shark and belonged to a number of bridge clubs while I was growing up. I’m guessing the upscale revisions to Miss Emmy Lou’s Chicken & Rice Salad recipe probably had a lot to do with my mother and her desire to impress her Thursday luncheon bridge group. She knew better than to serve a recipe that began “First, go out in the yard and kill a hen.” The recipe, as it reads now, should probably be called Jacqueline’s Chicken Salad but I believe she kept the original title as kind of a tongue-in-cheek jab at my grandmother (her mother-in-law) who was a staunch Baptist and steadfastly believed that card-playing was the work of the devil.

We are a people that believes in the passing down of culinary knowledge from one generation to the next, an endless progression dating back to that original ancestor who first set foot on Southern soil and said, “Hey, that smells good. Let’s eat it.” So what, you might ask, is my contribution to Miss Emmy Lou’s Chicken & Rice Salad? Champagne and Peach Schnapps. That’s right. Frosty Bellinis. I’m one of a new breed of Southern girls; some of us were debutantes and some of us weren’t but, regardless, we learned to drink at some of the finest universities in the country.

So really, what could be better than sitting by the pool with your girlfriends, a plate of Miss Emmy Lou’s Chicken Salad on your lap, and a cool Frosty Bellini clutched in your hot little hand, watching as the new pool boy, who bears a striking resemblance to Johnny Depp, cleans leaves out of the debris filter?

I’ll answer that. Nothing. Absolutely nothing.

Note: I like to use romaine leaves because they look pretty but you can also use an organic spring mix and mound the salad on top. 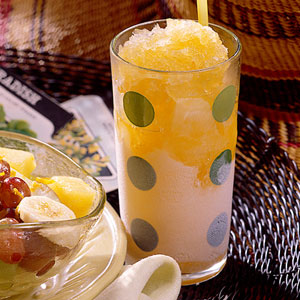 Combine all ingredients in a large pitcher, stirring until well mixed. Serve immediately in chilled glasses over crushed ice.