In writing a novel, I work from an extensive outline that describes in detail the events of every chapter, the settings, and the psychological states of the characters. As a result, when I began composing the “Advent” chapter in A Gentleman in Moscow, I knew that the Count would visit the Piazza (the main restaurant in the hotel) moved by memories of Christmases past; I knew that he would end up spying on a young man on a first date who, in choosing his entrée, risks appearing either unsophisticated or pretentious, yet makes an inspired selection; I knew that an 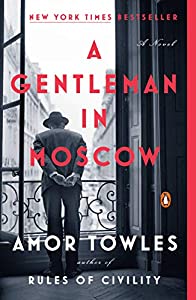 inexperienced waiter would make an ill-advised wine recommendation and that the Count would intervene to save the day. I knew all of this as I started writing the chapter. What I didn’t know is what the young man was going to order.

When I eventually got to the point when the young man is hesitating over his menu—on the verge of making his fateful decision—I turned to my own cooking for inspiration. What dish did I know that was situated between the Scylla of those lower-priced dishes (that might suggest a penny-pinching lack of flair) and the Charybdis of delicacies (that could empty one’s pockets while painting one as pretentious). After a few minutes of consideration, I knew it had to be the Latvian stew.

In the twenty-four years that my wife and I have been together, we’ve split the cooking—each developing our own repertoire of family favorites. For my part, living in New York with a full time job in the investment field and two young children, I have always been on the lookout for a new stew to add to my roster. After all, a good stew has many advantages to the working family man: it’s a perfect winter comfort food, it generally doesn’t rely on seasonal ingredients, it can be made on Sunday afternoons, and served to the kids twice in a week without complaint! Irish stews, beef bourguignon, tajines, I’ve made them all with pleasure. But when I first ran across this recipe for a Latvian stew in Saveur magazine in 2005, I was pretty skeptical. In scanning over the ingredients, I saw that the dish included pork, onions, carrots, apricots, prunes, a little tomato paste, and water—but that was it. How good could a stew be, I wondered, without any spices, wine, or stock?

Putting my trust in Saveur, I marshaled on and discovered that the lack of spices, wine, and stock was part of the dish’s genius. The simplicity of the composition allows one to experience the surprisingly complex contribution of its quotidian elements. Or, as the Count observes: “The onions thoroughly caramelized, the pork slowly braised, and the apricots briefly stewed, the three ingredients come together in a sweet and smoky medley that simultaneously suggests the comfort of a snowed-in tavern and the jangle of a Gypsy tambourine.” Yes, the dish is unquestionably delicious, but I also prize it because it evokes for me the ingenuity of the country cook—who must make the most of what little remains in the larder in the depths of winter.

While I design my narratives in great detail, there are always surprises that surface in the course of the writing. One good example is that in the outline of A Gentleman in Moscow I planned to have the Count observe this young couple order their stew and then head to the fine restaurant upstairs for a fancier meal. But as I was writing the scene, almost spontaneously, the Count decided to forgo herb-crusted lamb chops at the Boyarsky in favor of staying in the Piazza where he too could order a bowl of the Latvian stew.

For those who venture to serve this wonderful dish, I’ll make three suggestions. First, make sure your pork shoulder or butt is reasonably fatty, so that you end up with fork tender meat. Make sure that you cook the onions until they are a deep golden brown (which means cooking them for much longer than you would normally cook onions in a stew), so that you get that smoky essence. And finally, despite the Count’s assurance that Georgian wine is perfect for this meal, do not scramble about looking for one. Any good table wine will suit this dish to a T.

“A GentleBlend in Moscow” Book Blend

Amor Towles's Latvian Stew Recipe from A GENTLEMAN IN MOSCOW

A Latvian Stew recipe with pork, apricots and prunes from author Amor Towles, paired with his novel, A GENTLEMAN IN MOSCOW.

Season pork with salt and pepper. Heat 3 tablespoons of the oil in a large heavy-bottomed pot over medium-high heat. Add pork and cook, stirring occasionally, until meat releases its juices and is no longer pink all over, about 5 minutes. Add carrots and cook until slightly tender, about 5 minutes. Stir in tomato paste and water, then add apricots. Bring to a boil, reduce heat to medium-low, and gently simmer, uncovered, for 45 minutes.

Add onions and prunes to stew and continue to simmer over medium-low heat until pork is tender and sauce has thickened, about 30 minutes more. Adjust seasonings.

Serve this stew accompanied by boiled potatoes, buttered and garnished with chopped parsley, if you like.