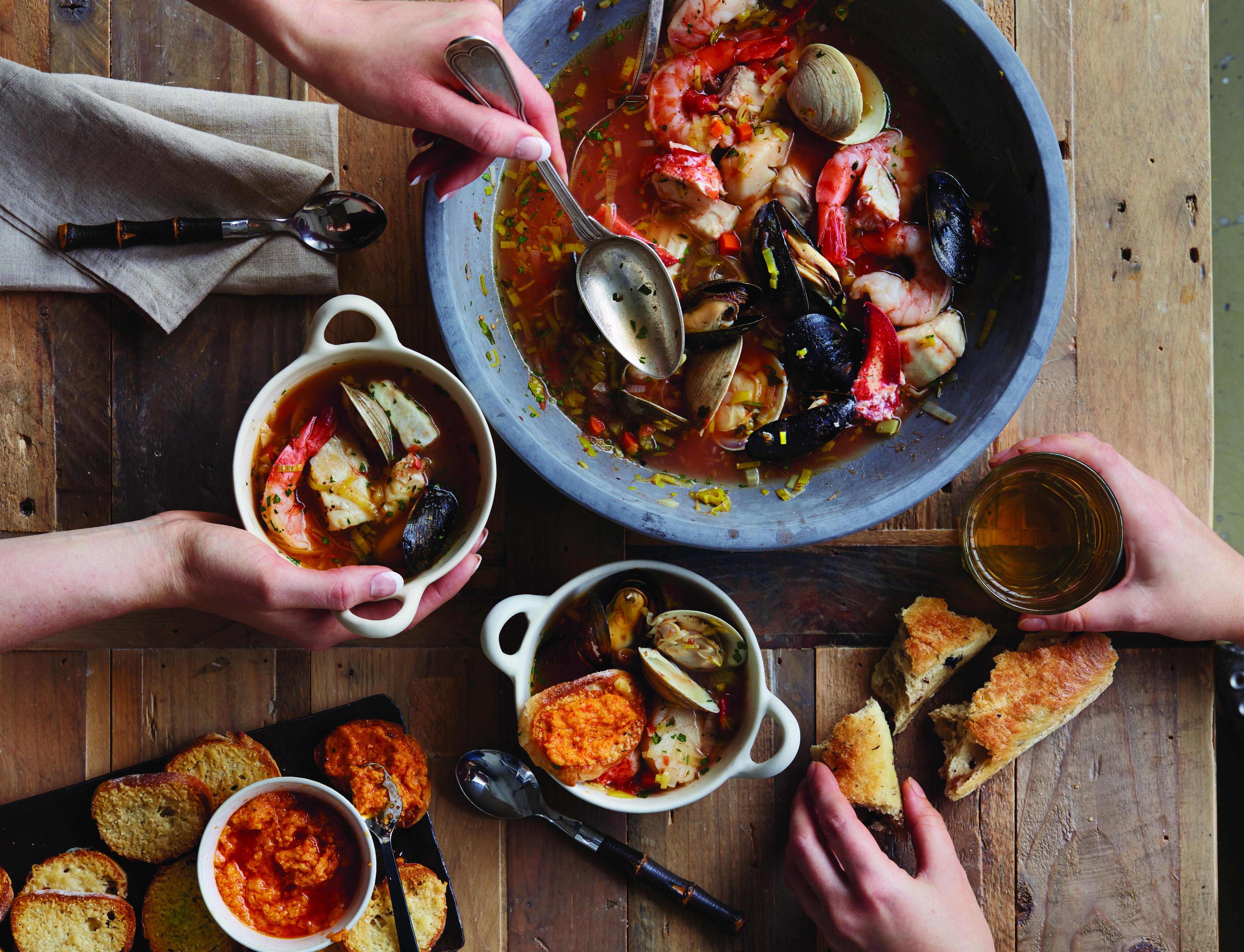 How can making a pot of soup build community? That’s the concept behind Soup Swap, my newest cookbook. Here’s the set up: invite a group of food-loving friends over—neighbors, family, book club, yoga group, PTO, etc— and ask everyone to bring a large pot of their favorite soup (as well Mason jars and take out containers). You make a salad or side dish, bread, and dessert. And then you have a soup party. At the end of the night everyone fills their jars and containers with the leftovers and no one gets stuck with the same old pot of soup all week.

Before you eat, go around the room and “introduce” your soup by talking about why you were inspired to make it, where any special ingredients might have come from (farmer’s market, travels abroad, etc) and then share recipes.

Soup Swaps are a great, easy way to entertain all fall and winter long. I have been sharing soup with a group of 12 friends and neighbors for six winters. Over the years our soups have become increasingly sophisticated and we have all gotten closer and found new meaning in winter and winter food.

When people ask me to choose my favorite soup it’s nearly impossible; (like choosing a favorite child, I respond). Depends on the season and what’s growing in my garden.  In late summer, when the harvest is in full swing, my collection of vegetable-based soups— from Tomato Soup with Grilled Cheese Croutons to Roasted Fall Vegetable Soup with Parsley Pesto — are great ways to use garden or farmer’s market produce.

When I traveled in southern France several years ago I ordered fish soup at every seaside bistro. This Provençal-Style Fish Stew is my version ( and one of my favorites) made with leeks, fennel, garlic, shrimp, lobster, clams, mussels and more. The fragrant spice saffron gives the soup a gorgeous color and flavor.

Looking forward to seeing the results of #SoupSwapParty bloggers’ choices. To warm, nourishing pot of soup and the sharing of your favorite recipes.

Enter to win a copy of Soup Swap

Crusty bread or Croutes, for serving

To makes the Croutes: Preheat the broiler. Arrange the bread slices in a single layer on a baking sheet. Using half of the olive oil, lightly brush one side of each slice and broil for about 1 minute, or until golden brown. Remove from the broiler and flip the bread. Brush with the remaining oil and broil for another minute or so, until the second side is golden brown. Let cool and store in an airtight container at room temperature for up to 4 hours.

To make the Rouille: If you have a gas stove, turn one of the burners to high. Place the bell pepper directly on top of the flame and char the skin, flipping it from side to side, for about 8 minutes, or until evenly blackened. Alternatively, preheat the broiler. Place the bell pepper on a piece of aluminum foil or a baking sheet and broil, turning it a few times, for about 8 minutes, or until evenly blackened. Using tongs, immediately place the blackened pepper in a paper bag, fold over the top a few times, and let steam for about 2 minutes. Remove the pepper from the bag and peel off the blackened skin. Discard the core and seeds and chop the flesh.

Using a food processor fitted with the steel blade, chop the bread finely until it looks like coarse bread crumbs. Add the garlic and roasted pepper and chop until blended. Add the olive oil, saffron, and chili powder (if using); season with salt and pepper; and process until the sauce is thick and chunky. Taste and adjust the seasoning, adding more salt and pepper if needed. Store in an airtight container in the refrigerator for up to 2 days. Bring to room temperature before serving.

To make the soup: Trim off the dark green sections from the leeks and save for making vegetable stock. Halve the pale green and white sections lengthwise. Rinse under cold running water, pat dry, and cut crosswise into thin pieces.

In a large stockpot over low heat, warm the olive oil. Add the leeks and cook, stirring, for 6 minutes. Stir in the celery, carrot, fennel, half of the garlic, the thyme, half of the saffron, and the parsley and cook for another 6 minutes.

Meanwhile, peel the shrimp, leaving the tails attached and reserving the shells. Devein the shrimp by cutting a shallow slit in the back so you can remove the thin black intestine. Set the shrimp aside covered in plastic in the refrigerator.

Cut a large square of cheesecloth, place the shrimp shells in the middle, and tie the ends of the cloth together to form a bundle.

Turn the heat under the pot to high and add the wine, tomatoes, fish stock, a pinch of salt, and a generous grinding of pepper. Add the cheesecloth bundle, making sure it is totally submerged in the liquid, and bring to a boil. Turn the heat to low and cook, partially covered, for 30 minutes. Taste and adjust the seasoning, adding more salt and pepper if needed. Remove the pot from the heat and let cool slightly.

Using a slotted spoon, remove the cheesecloth bundle and, holding it over the pot, squeeze with the back of another spoon to release all the juice. (At this point, you can cover and refrigerate the soup base for up to 1 day.)

Bring the soup base to a simmer over medium-high heat. Very carefully remove the rubber bands from the lobster claws (the lobster can pinch you, so pay attention). Place the lobster, shell-side down, in the pot, cover, and cook for 8 minutes. You may need to spoon some of the soup over the lobster a few times to keep it submerged.

Meanwhile, season the cod and the scallops with the remaining saffron and a pinch of salt and pepper. Set aside.

Using tongs, remove the lobster, letting any bits from the soup drain back into the pot, and let cool. When the lobster is cool (it will not be fully cooked), remove the meat from the claws and tail and cut into 1-in [2.5-cm] pieces; reserve. The body can be saved for snacking, or you can cut it up into four pieces to add to the soup for a very rustic look. Add the cod and lobster meat to the pot and cook for 3 minutes. Add the clams and mussels. When the shellfish just start to open, add the shrimp and scallops and cook until all the shellfish is open and the fish is tender and cooked through. Discard any shellfish that don’t open.

Ladle the soup into mugs or bowls and serve with crusty bread. Pass the rouille so that guests can spread as much as they like on their bread.