NO TIME TO WAVE GOODBYE

I’ve never baked Proust’s madeleine or even tried any of the recipes from Nora Ephron’s Heartburn. But one of the happy lessons that the Cappadoras learn early is to guard a great recipe – Grandma Rosie’s recipe for “gravy,” which is what Italians call pasta sauce, was passed down through generations with as much zeal as the secret recipe for Coca-Cola or Van Gogh’s ineffable way of creating the color yellow. In my family, a good recipe needs to be easy, inexpensive and evoke passionate reactions of joy. My children beg me not to forget the Sierra Secrets or the Tutu cookies at Christmas; my eldest took jars of my spaghetti “gravy” to college; my 13-year-old daughter has actually eaten so much of my mustard-and-ketchup meatloaf that she had to lie down for three hours. I believe I first found this recipe for rice pudding in a biography of General Ulysses S. Grant, but I adapted it myself so that I could make a huge pot of rice for stir-fry one night and have enough left over to make rice pudding and have it chilled for dessert or warm for a cold-weather breakfast the next day. 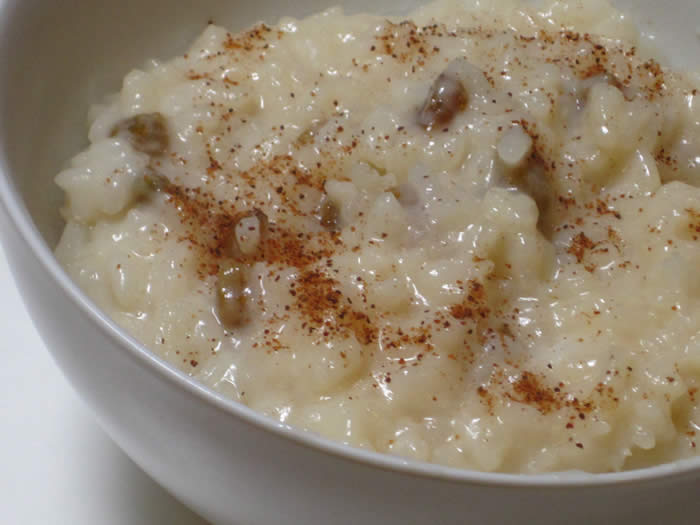 2 cups cooked white rice (it can even be left over from Chinese takeout, but no soy sauce please!)
2 cups milk, skim or 2 percent
1 cup sugar (I use raw or Turbinado sugar)
1/2 teaspoon salt
1 cup golden raisins
3/4 teaspoon cinnamon
1/4 teaspoon nutmeg (optional)
1/4 cup slivered almonds (not even an option at my house!
No one wants them but it makes for a more “grown up” taste)