A traditional Norwegian Christmas pudding,
topped with cinnamon and sugar.

My recipe is for a Norwegian Christmas pudding called rommegrod (pronounced “room-a-grout,” and indeed it could be mistaken for and function as grout). Rommegrod appears in my recent novel, The Stormchasers as a favorite dessert of the Norwegian twins, Karena and Charles Hallingdahl, the novel’s heroine and hero.

Legend has it that rommegrod, in pioneer days on the Plains, was served not only at Christmas but as a strengthener and curative. Norwegian settler women would give birth, be given a bowl of rommegrod, then get up out of bed and resume working in the fields.

I would think this story was apocryphal if I had not myself witnessed the miraculous powers of rommegrod in action. In her late eighties, in farm-town Minnesota, my grandmother Luverne Joerg broke her hip. Of course, this unhappy event would normally be seen as the beginning of the end, and indeed while she was in the hospital, my grandmother developed pneumonia. It was the first time I had heard the sound known as a “death rattle,” which sounded like a bicycle chain in her lungs every time she took a breath. She was failing fast, so much so that she was not expected to live the night. We called the family members in from New York and Arizona, as well as other parts of Minnesota, to say their goodbyes.

While we were waiting, I said to my mom — Luverne is my mom’s mom — “Why don’t we go to Decorah and get some rommegrod for her and see what happens?”

Decorah, Iowa is a Norwegian town that prizes its heritage, and one of the cafés still offers the pudding. We drove three hours from Rochester, Minnesota, bought a takeout bowl of rommegrod, and returned to the hospital.

I crushed my grandmother’s medicines, which she had been otherwise unable to take, and stirred them into the rommegrod. Then I coaxed her to eat a bite, and another bite, and another. She managed about half a bowl.

By the next morning, when my aunts and uncles arrived — my uncle Lowell weeping and saying, “Goodbye, little Mother!” — my grandmother was sitting up in bed.

“Why, hello,” she greeted everyone. “So nice to see you here!”

My grandmother Luverne lived to be ninety-eight years old. Thanks, rommegrod! 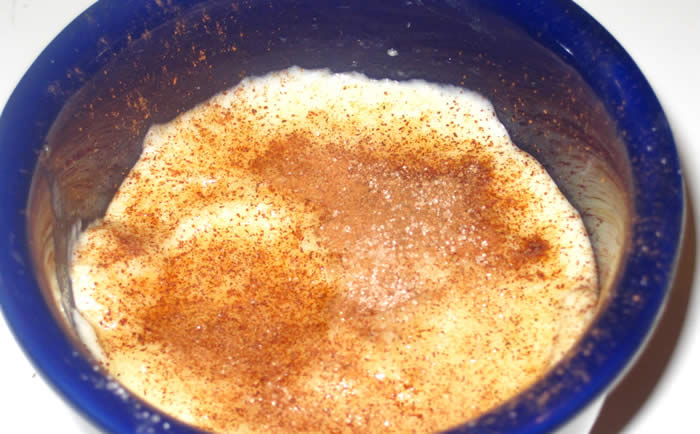 Note: This pudding can be reheated beautifully. My mom has it for breakfast for several days after Christmas!

1. In a large saucepan, bring cream to a boil over medium heat, stirring continuously. Boil for 15 minutes, stirring all the while.

2. Add flour and stir. (It’s okay that flour clumps up.) When mixture becomes a soft ball and liquid has separated in the bottom of the pan (this will take about 30 seconds), remove from heat. Transfer mixture to a strainer and allow liquid to drain off. Reserve liquid, and return solids to the saucepan.

3. In a separate, medium saucepan, bring milk to a boil over medium heat. Add milk to cream solids, and bring to a boil over medium-low heat, stirring. Reduce heat and simmer until thick and velvety, stirring until arms are indeed about to fall off, 15-20 minutes. Use hand-held electric mixer set on low, if possible (but it’s okay if you don’t have one; the old Norwegian ladies didn’t, either).

4. Serve either hot or cold. Top with cinnamon and sugar, and drizzle with some of the reserved liquid. Refrigerate any leftovers.