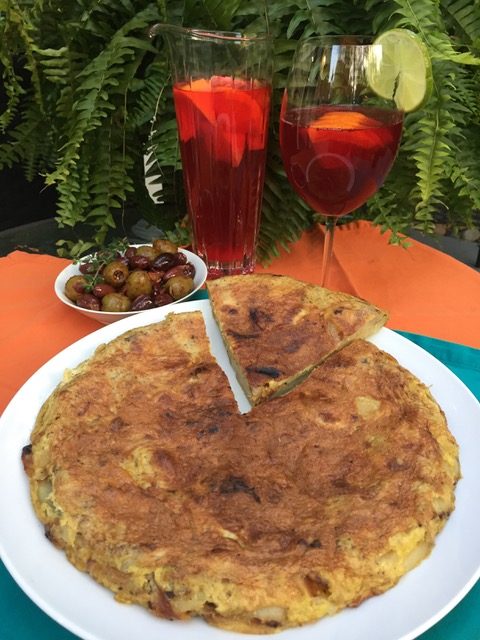 Spain is a feast of sights, sounds, and smells. As you read The Fountains of Silence, I hope you can feel Madrid in 1957. The sunshine. The passion. The fear. The silence.

Spain is also a culinary capital of the world. While working on the book, food played a large role in my research. As you may have noted, there are many mentions of Spanish food throughout the novel and, yes, I delighted in tasting the numerous dishes and delicacies I mention in the story! To immerse myself in the period and atmosphere, I collected archival menus, drink cards, room keys, and even place settings from the Castellana Hilton. While researching, I highlighted mentions of food in vintage magazine and news service clippings. I interviewed a gentleman who was a waiter at the Castellana Hilton in Madrid for many years.

These recipes were created by chef Joseph Baer of Nashville, Tennessee to echo the following scenes in the book.

An author has nothing without readers. Thank you for choosing The Fountains of Silence and helping me give voice to an underrepresented part of history.

Author Letter, Giveaway and more in The Book Club Buzz

• Chapter 17 – Traditional Red Sangria
Daniel returns to the hotel from his errands with Ana. They find the lobby brimming with people, all chattering in English.
Ana informs Daniel that it’s the cocktail event prior to the monthly luncheon for the American Club of Madrid.
While researching the novel, I read through 1950s archival copies of the hotel magazine, Castellana. The magazine often covered the events of the American Club. The pictorial spreads described the guests, the lunchtime libations, and the menus. So I incorporated the historical detail of the monthly luncheon for the American Club into the novel. I imagined Daniel returning to the hotel in dusty jeans to find waiters balancing sparkling trays of chilled sangria threading through dozens of well-heeled guests.

Ruta Sepetys's Traditional Red Sangria recipe, inspired by a scene in her novel, THE FOUNTAINS OF SILENCE.

• Chapter 74 – Tortilla de Patatas
Although Americans ate very well when they visited Spain in the 1950s, many Spaniards went hungry. The lobster appetizer on the hotel menu in Madrid cost more than many in Spain earned in a month. Throughout the novel, Daniel displays quiet generosity, often through food. When he visits Ana’s home in Vallecas he arrives with wine and snacks. He invites Ana to a room service dinner and asks her to join him at the restaurant Lhardy. And when he attends the capea with Rafa and Fuga, he makes sure to bring lunch—Tortilla de patatas, oranges, and Manchego cheese.

In many cultures, sharing a meal or a bit of food is an expression of generosity and love. It allows us to take a moment to pause, be present, and enjoy the company of those around us. To celebrate that tradition, I’ve included many scenes in the novel with meals, shared food, and the characters joined together at a table. Can you identify those scenes?

Ruta Sepetys's Tortilla de patatas recipe, inspired by a scene in her novel, THE FOUNTAINS OF SILENCE

This is the most traditional tortilla but it’s infinitely adaptable and just as delicious by adding chorizo, manchego, herbs or any cheese, meat or vegetable of your choice. Simply put the additions into the whisked eggs before adding the onion/potato mixture.