Spaghetti in a creamy cheese sauce, topped with breadcrumbs and baked.

ABOUT THE TENTH MUSE: MY LIFE IN FOOD

From the legendary editor who helped shape modern cookbook publishing—one of the food world’s most admired figures—comes this evocative and inspiring memoir.

Living in Paris after World War II, Jones broke free of bland American food and reveled in everyday French culinary delights. On returning to the States she published Julia Child’s Mastering the Art of French Cooking. The rest is publishing and gastronomic history. A new world now opened up to Jones as she discovered, with her husband Evan, the delights of American food, publishing some of the premier culinary luminaries of the twentieth century: from Julia Child, James Beard, and M.F.K. Fisher to Claudia Roden, Edna Lewis, and Lidia Bastianich. Here also are fifty of Jones’s favorite recipes collected over a lifetime of cooking—each with its own story and special tips. The Tenth Museis an absolutely charming memoir by a woman who was present at the creation of the American food revolution and played a pivotal role in shaping it.

I made this recently, thinking that, after all these years of tasting the wide world of Italian pasta, I would find spaghetti in a creamy cheese sauce rather passé. But instead that taste memory surfaced, and I was right back in my middle-school years slurping down the spaghetti strands dripping with that creamy sauce, so rich with aged Vermont Cheddar cheese that it was like a pudding, and I loved it. I realized that in a way this dish had been an initiation into territory I was yet to discover. All the component parts, though simple, were basic and authentic—and not un-Italian, sort of a preamble. Your children will adore it—that is, if they haven’t been corrupted by the packaged macaroni and cheese, and even then, maybe you can wean them.

This recipe is about right for two. You can also halve it to make it just for yourself, or do the whole amount and freeze half of it for a rainy day. Or double or triple it. 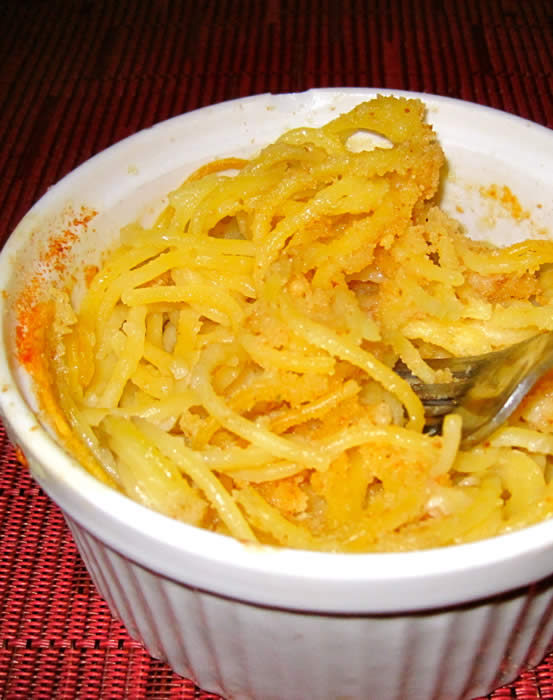 Bring to a boil a big pot of salted water. Break the spaghetti strands in half (forgive me, Marcella and Lidia, but that’s what we did in those days), and drop them into the boiling water.

Meanwhile, melt the butter in a small heavy pan, stir in the flour, and let cook gently a minute or two, stirring. Remove from the heat, and when the bubbling has ceased, pour in the milk all at once, and whisk constantly over low heat until the sauce thickens, scraping the bottom and sides of the pan. Season to taste with salt and pepper and a few gratings of nutmeg. Off heat, add the cheese, a little at a time, stirring until it is all melted.

By now the spaghetti should be done al dente. Taste, and when it is ready, drain and toss it into a 1-quart or slightly smaller baking dish, not too shallow. Pour the sauce over, and fold it into the spaghetti. Sprinkle the breadcrumbs on top, drizzle the butter over, and cover with the grated cheese. Bake in a preheated 375-degree oven until lightly browned on top and bubbling below—about 20 minutes if it’s warm when it goes in.

It was Julia [Child] who taught me in making a béchamel or white sauce that trick of pouring in the milk cold after the bubbling of the roux has ceased, and whisking vigorously when you put the pan back over low heat. That way, you don’t have to go to the bother of heating the milk.

It may seem like heresy to use Parmigiano-Reggiano for the topping, but it adds an Italian touch and it is awfully good.

Excerpted from The Tenth Muse by Judith Jones. Copyright © 2007 by Judith Jones. Excerpted by permission of Anchor, a division of Random House, Inc. All rights reserved. No part of this excerpt may be reproduced or reprinted without permission in writing from the publisher.