As fans of food and book bloggers, we knew they would have some creative approaches to recipes inspired by The Lost Family, author Jenna Blum‘s new novel. On June 3, we hosted #TheLostFamilySupperClub:  a gathering of eighteen bloggers at a virtual dinner party to celebrate the book’s release, sharing novel-inspired recipes and creating mouth-watering menus. It was quite an evening!

The Lost Family, from the New York Times bestselling author of Those Who Save Us,  creates a vivid portrait of marriage, family, and the haunting grief of World War II in an emotionally charged story that spans a generation, from the 1960s to the 1980s. German-Jewish concentration camp survivor, Peter Rashkin, emigrates to New York, opens an iconically successful restaurant, and starts a new family—only to find that he, and they, are haunted by the family he lost during the war.

The novel provided bloggers food for thought, and they shared their insights about the role food plays in the book: “When I first started reading, I immediately understood WHY this book was being celebrated with a virtual supper club. The food is almost like a character in this novel,” wrote Sarah of The Pajama Chef.  “[Peter] is an Auschwitz survivor and suffers from survivor’s guilt as he mourns the loss of his wife and children. He runs a restaurant named after his late wife, Masha… He uses cooking and his restaurant as a temporary escape,” shared The Redhead Baker.

“Peter has never dealt with the grief and guilt of losing his family.  He refuses to speak of it and has buried himself in his work, creating the restaurant that he and his wife, Masha, had dreamed of opening one day.  Food is Peter’s lifeline, it is what gives him direction and keeps him going each day,” noted Wendy of A Day in the Life on the Farm.

“Though the biggest focus on food is in Peter’s section of the book, it appears throughout the story in family dinners and parties, eating out, in Peter’s second restaurant and testing recipes for a cookbook he is writing. [Blum’s] food descriptions made me hungry and made me want to head to the kitchen,” wrote Deb of Kahakai Kitchen, who kicked off the party with a soup to savor: 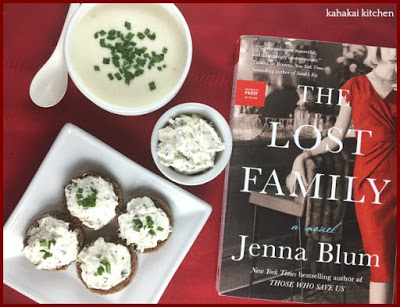 Vichyssoise, served with Toasts with Caraway and Cheese Spread, turning to Betty Crocker’s Picture Cookbook for a cold soup (to suit a warm week in Hawaii!), and with a nod to Peter’s daughter, Elsbeth, “who loves the dips and spreads that are at Ruth and Sol’s.”

The Unofficial Mad Men Cookbook enjoyed being transported to 1960 New York and delivered menu items from Grand Central Oyster Bar, Peter’s first employer: Oyster Stew and Oysters Rockefeller, with a side of restaurant and mollusk history. 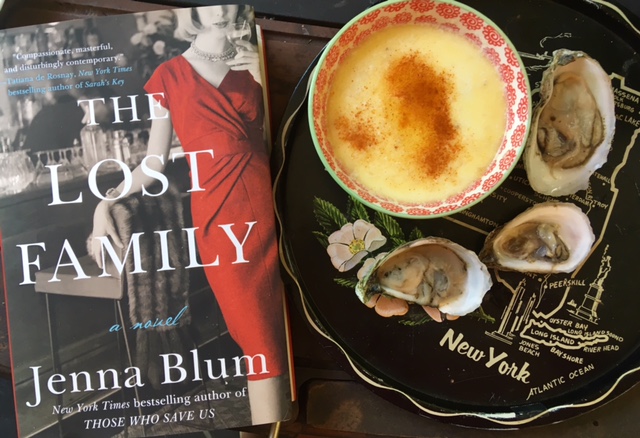 A lttle breakfast for dinner followed. Peter’s “Special Scrambled Eggs,” as described in the novel:
First, he would caramelize onions in a pan, cooking them very slowly in butter until they were translucent; then he added eggs whipped to a froth, heavy cream, ham, fresh dill and the secret ingredient: a dollop of Neufchatel cheese.
This passage spoke to A Day in the Life on the Farm, and we devoured her version.

The Pajama Chef also had this egg dish in mind when she created Cheesy Ricotta Frittata Cups, her son’s favorite breakfast. She recalled that Peter’s daughter Elsbeth “had her own jacket with her name stenciled on the lapel, a mini chef’s hat, rubber clogs, and a special stool to stand on while she helped Peter stir and mince and measure. I am just in love with that scene. There’s so much happiness and joy between father and daughter. With the knowledge of what comes before and after (it’s actually a memory), it’s very poignant in the life of Peter, June, and Elsbeth. There’s performance and ritual and relationships… and caring for others through a purposeful, planned, and delicious meal. Though my eggs aren’t just like Peter’s in ingredients, they are in spirit: a way to care for my family through good food.” We adored her writing about this dish — and it disappeared quickly.

Lupita Reads arrived with yummy homemade pretzels and a German beer pairing: Paulaner Hefe-Weizen.  “It was only natural to land on pairing a delicious cold German beer with homemade pretzels, which are mentioned in the novel. I’d envision these pretzels could be sold outside of Masha’s,” she said. 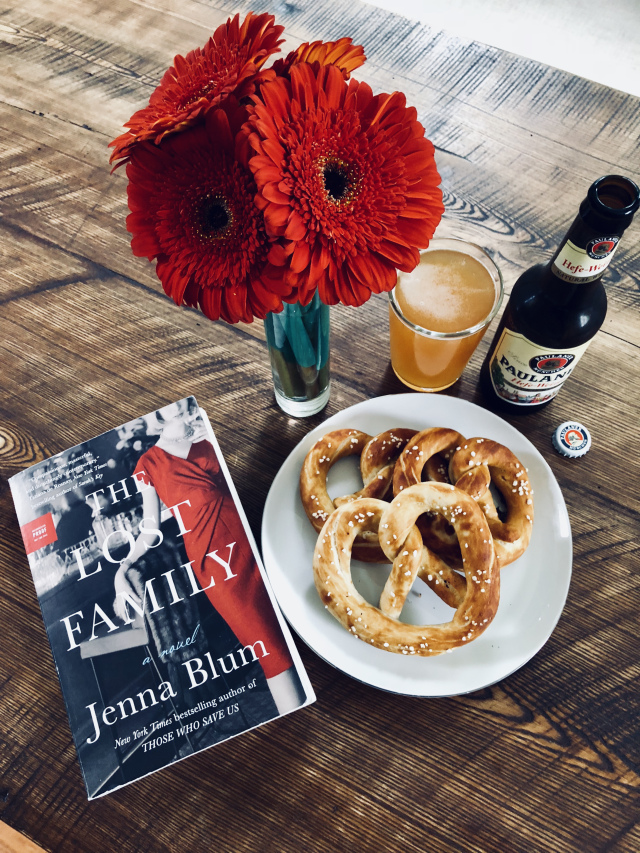 Side dishes were stars of the show: Not Starving Yet dished up Green Beans Amandine, inspired by a passage in which Masha’s prep chef sets out Peter’s mise en place with bowls of shallots, parsley, garlic confit, lemon zest, and kosher salt.  Sidewalk Shoes knew she had her party plan when she saw Masha’s Fall 1965 menu’s  “Dish of House-Made Pickles.” “I didn’t even need to think about it.  You see pickles are my jam,” she exclaimed. For briciole, Spring Peas with Fresh Mint on the restaurant’s menu moved her to invent an exquisite Italian vegetable side dish of sugar snap peas with pancetta and pine nuts. “Masha’s dish brought me back to my childhood in Italy: shelling peas was one of the tasks assigned to me. I didn’t enjoy it because as a child I did not like peas. Fortunately, later my taste changed and from then on I ate my mother’s peas gladly—seconds too. Both Masha’s dish and my mother’s used shelling peas. When I moved to the US, I tasted first snow peas and then snap peas.” Novel Meals baked an Herbed Bubble Bread (and mixed a martini). “I thought about Peter as he chopped vegetables and herbs, as he rolled dough to make bread, losing himself in the kitchen environment.”

On to the main course! Hamburger Walter, a menu item from Masha’s and favorite dish of patron Walter Cronkite, piqued a few bloggers’ interests and they delivered a variety of tasty versions. Eliot’s Eats settled on a basic Steak au Poivre recipe, swapping out the filet mignon for hamburger. Amy’s Cooking Adventures was instantly intrigued by how the sauce favored the Hamburger au Poivre. “The sauce is fantastic and complements a grilled burger perfectly – especially in the heat of summer!” Louisiana based Stacey of Prose and Palate waxed about her spicy burger, as she “jazzed it up a bit, as Cajuns are known to do.”

Dinner is Served 1972  got a round of applause when she arrived with —YES— three dishes,  inspired by each of the three sections and time periods of The Lost Family , from the 1960s to the 1980s: Beef Wellington, Chicken Kiev and Chef’s Salad. An amazing researcher, she also located a menu from a restaurant where characters dine in the book. “There is one scene where June goes out to dinner at the Flame Room at the Minneapolis Radisson; and her dining companion orders them both Chicken Kiev. I found a 1960s menu from the Flame Room and sure enough, Breast of Capon a La Kiev with wild rice is on the menu.” 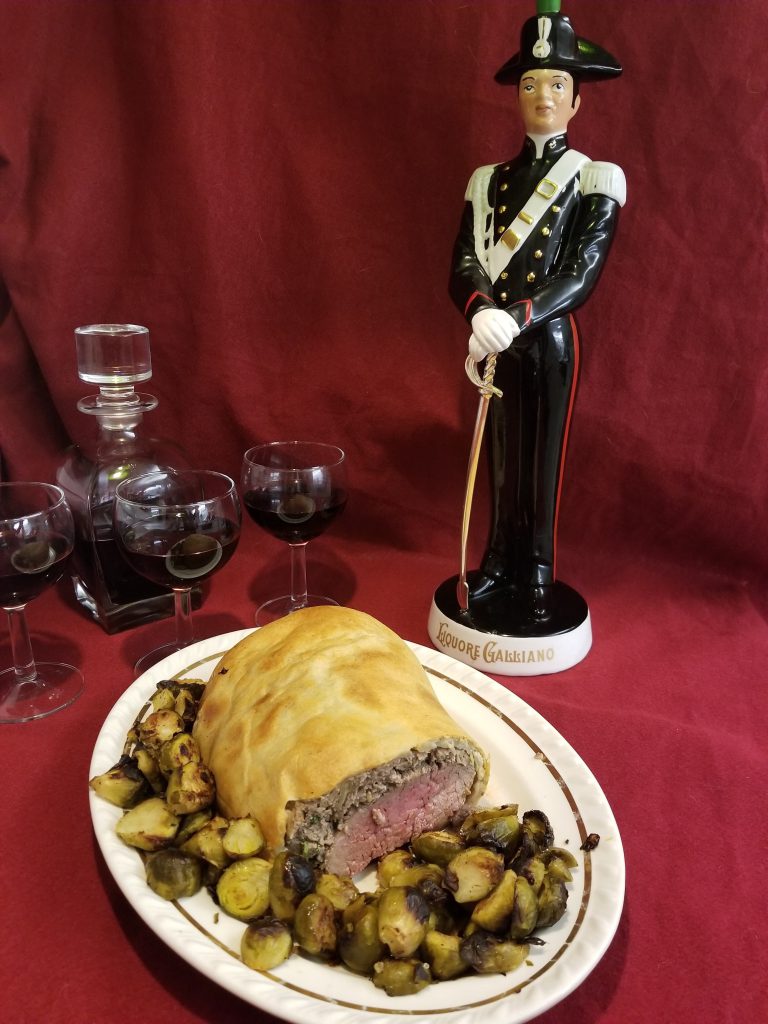 Culinary Adventures with Camilla lured us to dessert with gorgeous Lavender-Salted Meringues, adding a twist to the “Little Clouds” on the Masha’s menu by dressing them up with a few drops of natural food dye and some lavender-vanilla salt.  MidCentury Menu welcomed the chance to sift through her 1960s restaurant cookbooks, and wowed us by baking the iconic recipe for Lindy’s Cheesecake by food writer Clementine Paddleford in her classic cookbook, How America Eats.

Honeycrisp Apple Crumble appealed to The Redhead Baker: “It was quite popular in the time period of the book. I consider it a ‘comfort food,’ one I’d turn to if I were coping with grief.”

Tortillas and Honey aimed to create a dessert that “Peter may serve in his restaurants that either would be a nod to his German heritage or something to reflect what folks would serve when entertaining company,” and her grandmother’s Betty Crocker cookbook helped her locate the perfect choice: Blitz Torte. “This torte has layers of cake, meringue, and custard. It is elegant and luscious!” 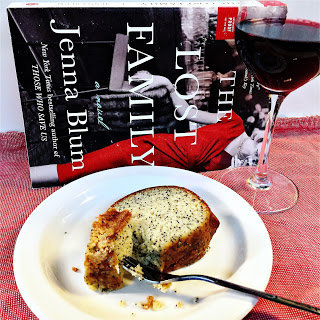 BethFishReads had Lemon Poppyseed Cake in mind:  “Even before I started reading, I already knew what recipe I was going to share. Lemon poppy seed coffee cake reminds me of both my grandmothers, and the Bundt pan it’s baked in is historically accurate for the novel.”

We’re grateful to this talented group of bloggers (who are also fun partygoers!) They helped to create this incredible menu for book clubs, foodies and readers to enjoy.  See all the recipes on our party page and follow on social media with the hashtag #TheLostFamilySupperClub.  You can enter to win a copy of  The Lost Family on BookClubCookbook.com beginning June 5. And check Jenna Blum’s book tour to see if she has an event near you.